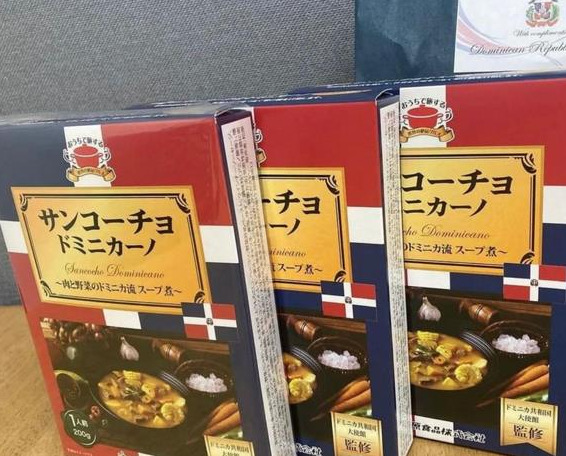 The Dominican Republic is known worldwide for being one of the countries with the greatest cultural wealth, which captures the attention of millions of people around the world.

One of the biggest attractions of the half-island is its gastronomic diversity. Typical Dominican food has dishes that catch the tourist and flood his palate, causing him to want to repeat.

Within the Dominican stoves, the famous “Sancocho” is prepared, one of the emblematic dishes of the Creole table. This typical food has crossed borders and even continents. Proof of this is that the popular broth is already on the Japanese market.

It is a project that began in December 2021 with the Matsubara Shokuhin company, but which went on the market on July 20, 2022, explained the Dominican ambassador to Japan, Robert Takata.

According to the diplomat, the intention is to promote the Dominican image, a strategy that is part of his objective since he assumed the role of ambassador to the Asian country.

“From that intention stems the idea of ​​working with various institutions on projects that would allow us to develop and make available to the public a type of versatile product, but loaded with history and culture for Dominicans and that, apart from those elements, could get along well with the Japanese palate,” said Takata.

The case of the ingredients of the dish has been one of the most controversial to create the product, according to Takata, and the main reason is because there are ingredients that are used in the Dominican Republic to make the sancocho that do not exist in Japan, and others that, even when they exist, are not compatible with the Japanese palate or would make the product more expensive.

The preparation is easy and simple. The dish is already prepared in a bag that keeps it in an optimal state for a year without the need for refrigeration.

It has Japanese technology contained in a presentation that allows it to be kept in an optimal state for human consumption without even needing refrigeration, and that it can be heated at the time of consumption in a microwave or, in case of disasters and collapse of electrical energy, placed directly inside the container in a container with hot water.

The manufacture of this package and these elements would allow this food, in addition to being consumed normally, to be used in extreme cases of shortage or disaster.

The cost of the product is about six and a half dollars.

A section that calls the attention of the Dominican sancocho in Japan is its packaging. The current presentation is personal, with a weight of 200 grams per box.

The graphic presentation of the packaging consists of cultural elements from the Dominican Republic. It presents images of the dish itself, as well as the main ingredients, and on the other hand, a narrative about the meaning it has for Dominicans and their history.

Within the statements offered by the diplomat, he added that the reactions have been positive

“There are cities, such as Kita Hisroshima, where small tasting activities have been carried out in an iconic restaurant in the city”, Takata said.