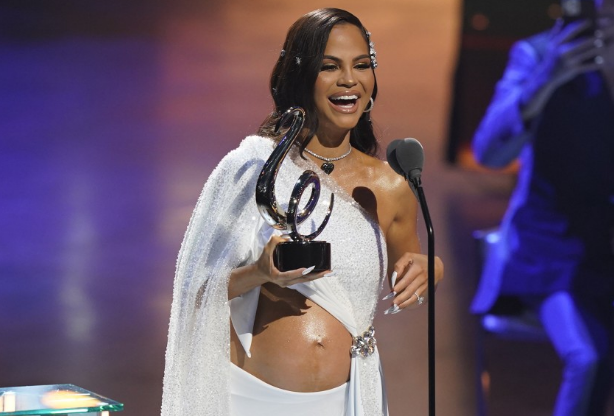 Natti Natasha confirmed that she is pregnant. “I’m going to be a mother,” revealed the Dominican urban exponent and wore her state during the Premio Lo Nuestro gala last night in Miami.

“A blessing that God sent me, one more proof that women are warriors, so many times that many doctors told me: -You will not be able to be a mother, and today in front of all of you this six-month-old belly, sharing it with the whole world, so very happy to work three times, “said the artist when she received a statuette from Premio Lo Nuestro.

She had previously confirmed the rumors of her pregnancy to People en Español magazine: “We are super happy. I’m going to be a mom. I’ve never been in such a good mood in my life”.

While she sang the song “Before the sun rises,” last night at Premio Lo Nuestro with her colleague and her compatriot Prince Royce, the Dominican caressed her belly covered by a white dress.

Raphy Pina’s reaction was jubilant: “What an immense gift Dad God has given us! @Nattinatasha God is the one in control and no matter how much they tell us NO, when he says YES, it turns out. A new life is on the way and you will have the best parents in the world, the best families and the best fans!

At the beginning of February, the Dominican artist confirmed that she accepted the marriage proposal of the Puerto Rican music producer Rafael “Raphy” Pina, after making it known a week before publicly that they were in love and had been in a relationship for a long time.

The couple spent part of January on a cruise around Puerto Rico on Pina’s boat.

The confirmation that the couple had a relationship came with a video of more than eight minutes published on Pina’s Instagram account recorded in La Parguera, municipality of Lajas, on the south coast of Puerto Rico, which ends with a kiss.

Pina has three teenage children from a previous relationship and for Natti she will be her firstborn.