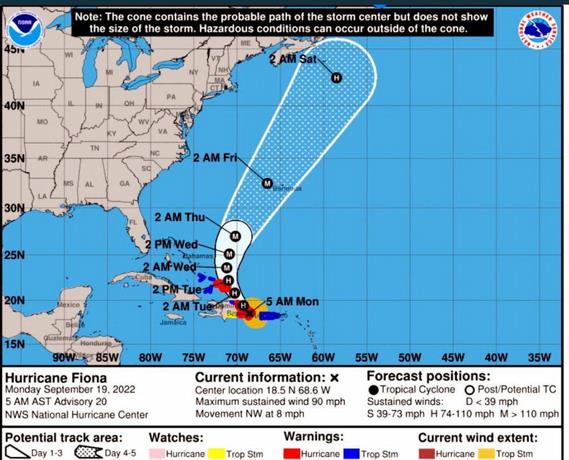 The report from the National Meteorology Office at 4:00 in the morning indicates that there are areas where the accumulated rainfall could reach about 450 millimeters.

Director Gloria Ceballos is posted an image with the predicted trajectory.

Below, we reproduce the full Onamet report on Fiona.

At approximately 3:05 a.m. Today, Monday, through satellite and radar images, the impact of Hurricane Fiona with winds of 140 kph and higher gusts, was produced by Cabo San Rafael. Fiona’s center was located at 4:00 AM about 20 km southwest of Punta Cana. Hurricane-force winds extend about 45 km away from its center and storm-force winds about 220 km, and it is moving westward. /northwest at about 15 kph.

According to the current projections of its trajectory, the center of Fiona would be moving through the east of El Seibo and the northern sector of Hato Mayor in the next few hours, to then probably continue through Samaná.

The Punta Cana Meteorological Station has continued to report moderate to heavy rains, in addition, maximum sustained winds of 79 kph and a gust of winds of about 124 kph were reported, winds with this intensity and higher will spread throughout the rest of La Altagracia, El Seibo, Hato Mayor, La Romana, Sánchez Ramírez and Samaná, as the hours go by and Fiona’s progress continues.

The numerical prediction models indicate that Hurricane Fiona will generate accumulated rainfall that will range between 100 and 300 millimeters, and may be higher in isolated points, especially in higher areas, up to about 450 millimeters.

The swell will continue to be dangerous, especially on the southeast, east and northeast coast throughout Monday, with wave heights between 10 and 14 feet expected with upper breakers, which could reach up to 18 feet. Therefore, operators of fragile, medium and small vessels must remain in port, both on the Atlantic and Caribbean coasts. Vessels of greater draft, must take into account the current position and future trajectory of Fiona. We must also be vigilant against the possibility of coastal penetrations of the sea at low points.