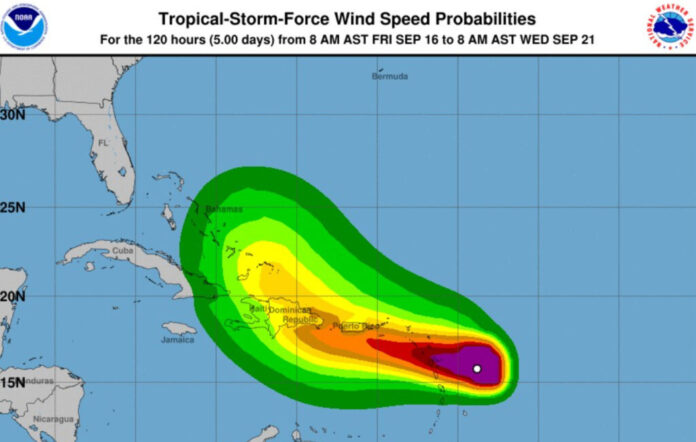 At 1:00 p.m. the center of Tropical Storm Fiona was located near latitude 16.0 north and longitude 59.7 west, that is about 165 km east of Guadeloupe, Lesser Antilles, and about 975 km southeast of Saona Island, and is moving toward the west about 14 mph.

The maximum sustained winds are 85 kph, it could gradually increase its intensity, mainly when it enters the warm waters of the Caribbean Sea.

Storm-force winds extend about 220 km away from its center.

Currently, satellite images show Fiona with a wide structure, composed of heavy rain, thunderstorms and stormy winds. This compact cloudiness could gradually generate, especially from the early hours of Sunday, accumulated rainfall between 125 and 200 millimeters, values ​​that could change depending on the future evolution of Fiona.

We repeat, at 1:00 p.m. Fiona at latitude 16.0 north and longitude 59.7 west, about 165 km east of Guadeloupe, Lesser Antilles, and about 975 km southeast of Saona Island, moving west at about 22 kph, maximum sustained winds of 85 kph and minimum central pressure of 1005 millibars.

The NHC – NOAA National Hurricane Center forecasts that Fiona may gradually strengthen over the Northeast Caribbean Sea and could be close to hurricane intensity as it approaches the southern coast of the Dominican Republic on Sunday night/early Monday morning.