Norwegian Cruise Line is the new cruise company that begins technical operations in July 2020 arriving at the port of La Romana.

President Luis Abinader pointed out that the agreement enables the country to receive about 20 thousand tourists each month.

“The Dominican Republic is everyone’s home. And from today, and thanks to this agreement, it will also be home to the more than 5,000 potential tourists who will be able to reach our wonderful coasts every Sunday”.

The president said that one of the greatest efforts of this government is the development of tourism.

“As you all know, one of the greatest efforts of my Government is oriented towards the development of the tourism industry, its empowerment, sustained growth, and the consolidation of the Dominican Republic as one of the most important tourist destinations in the world”. 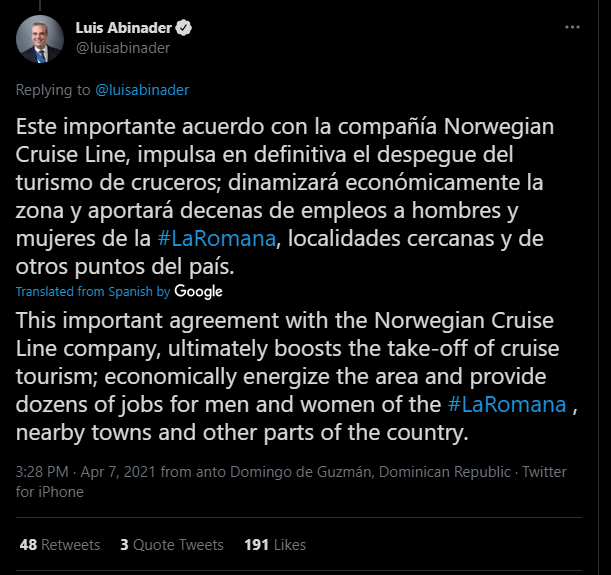 The cruise line restarts its operations at a reduced capacity of its vessels, two stops in the Caribbean, and as its mother port La Romana, where its first arrival is expected on August 15th.

As part of the biosecurity measures to prevent the spread of the coronavirus, passengers, and crew with a boarding date until October 31st are required to get vaccinated and examined before boarding.

“Over a year after we initially suspended travel, the time has finally come when we can bring our loyal guests the news of our great cruise return. And announcing this stop in the Caribbean and the HomePort in La Romana is news that we celebrate and have been waiting for a long time”, emphasized Harry Sommer, President, and CEO of Norwegian Cruise Line.

The Minister of Tourism, David Collado, highlighted that March showed a growth of 3.4%, achieving the entry of the largest number of tourists after the arrival of the pandemic to the country.

The agreements were reached through the intermediation of the Executive Director of the Port Authority, Jean Luis Rodríguez, who highlighted the importance for the country that the Norwegian Cruise Line brand uses our port and the Dominican Republic as a logistics center with the goal of converting the country at the Caribbean Hub.

“We are excited to be part of this important alliance, the arrival of Norwegian Cruise Line to the Dominican Republic as the first homeport in the Caribbean, represents a great opportunity for us; and from the Port Authority we guarantee all the necessary protocols to be our safe ports”,  stated Jean Luis Rodríguez, Executive Director of the Dominican Port Authority.

It began operations in 1966. It currently owns 14 ships, and another two will enter service in the future. NLC has more than 450 destinations around the world.

Dominican Republic in the works of diversifying its tourism offer