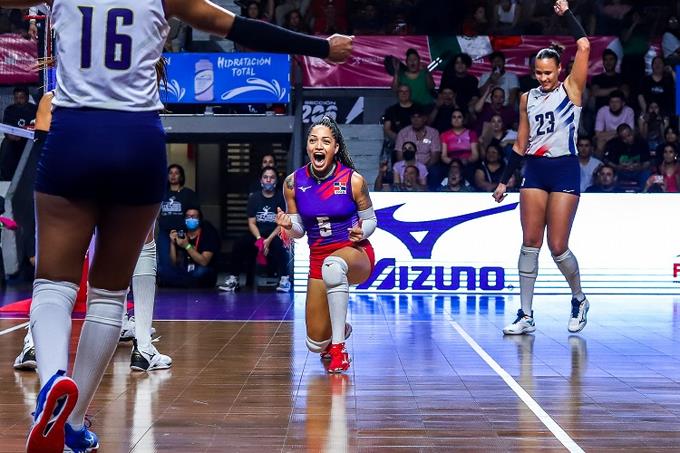 The Queens of the Caribbean applied all their experience on the court to sweep Colombia in three straight sets, after losing the first set and thus retained, for the second time in a row, they retained their title of champions undefeated by winning 3-1 ( 21-25, 25-13, 25-21 and 25-16), in the final match of the XIX Women’s Volleyball Pan American Cup.

The awards were completed by Skinner from the USA, second best spiker and best scorer, María Alejandra Marin, best setter and D. Mosquera, from Colombia, the second best blocker.

It is the seventh champion crown that the Quisqueyanas have achieved in Pan American Cups since 2002 and the second time they have done it in consecutive years.

It is the fourth defeat in a row that the Creoles apply to the Colombians in their confrontations in the different events that they have faced.

The winners’ attack was led by Bethania de la Cruz with 23 points, followed by Gaila González with 15 points. For Colombia, Ana Karina Olaya left with 17 points and Amanda Coneo with 12 points.

The Dominicans had to recover after losing the first quarter 25-21 at the hands of Colombia, whose athletes entered with great impetus and great strength, with an organized attack and a strong block that could not be deciphered by their rivals.

In that first quarter it became well fought in the offensive field, however, the Colombian sextet with a well-coordinated game in the defensive and offensive aspects, began to get points above their rivals.

Colombia’s block became impotent which put the Dominicans in trouble.

The trio of Segovia, Soto and Coneo behaved fiercely, with good accommodation from María Alejandra, and managed to give Colombia a 20-15 lead.

Colombia maintained their technical quality and with good, well-precise attacks and a strong defense, both in the area and on the floor, they took the first games convincingly.

In the second set, the Dominican Bethania de la Cruz started like a storm with strong shots from all sides of the court, in addition to the good blocking of Cándida Arias and Gaila González that gave the Queens an 8-6 advantage against Colombia.

The Caribeñas took advantage of the fact that the Colombians lowered their intensity in the offensive game, while Bethania de la Cruz, Gaila González and Yonkaira Peña stepped up the pace knowing how important it was to tie the score at one.

Only Colombia could score 13 points in the second quarter.

In the third, it was one of many alternatives, since the Dominicans achieved a great game by Bethania de la Cruz and Gaila Gonzalez to get a 6-4 lead.

They then put together a 7-0 rally to put the game up 11-4. However, Colombia with Karina Olaya coming off the bench by scoring seven points in the set made Colombia come back in the set and put it 13-12, they barely lost Colombia by one point.

Bethania de la Cruz brought calm back to the Dominican Republic and put the game 21-17. The blocking of Cándida Arias and Geraldine González also worked.

In the fourth, the winners maintained their pace of play and did not give their rivals a chance to win another set.

The Dominican Republic has been, with last night, in the final game of the Pan American Cup on 16 occasions, triumphing in six of those visits.

The first time Colombia and the Dominican Republic met in a Pan American Cup was on July 4, 2013, in Peru, where the criollas won the match 3-0.

In July 2018, at the Central American and Caribbean Games, the Queens of the Caribbean disposed of Colombia to retain their crown for the fifth time in form. The streak began in El Salvador 2002, continued in Cartagena 2006, Mayagüez 2010, Veracruz 2014 and Barranquilla 2018.

In August 2019, the Dominican Republic women’s volleyball team defeated Colombia 3-1 and won the title and gold medal of the Lima 2019 Pan American Games, the second in its record after the one obtained in Santo Domingo 2003.