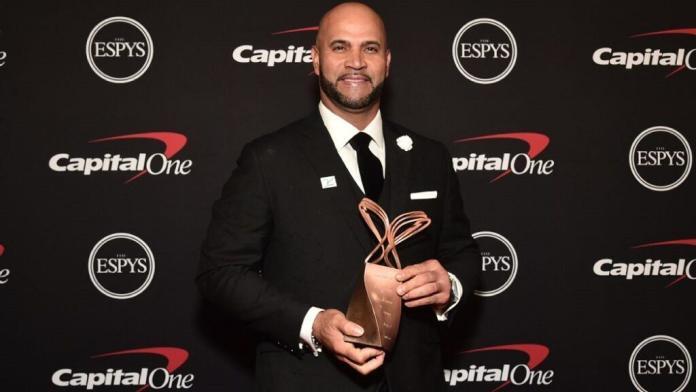 Albert Pujols was named the 2022 recipient of the Muhammad Ali Sports Humanitarian Award as part of the ESPYS awards Wednesday night in Los Angeles, another accolade for the retiring St. Louis Cardinals slugger.

Pujols beat another athlete of Dominican origin, the star of the Minnesota Timberwolves in the NBA, Karl-Anthony Towns, ESPN published this Wednesday.

The award is given to an athlete whose “continued and demonstrated leadership has created a measured positive impact on their community through sport. The nominee must embrace the core principles that Muhammad Ali embodied so well, including confidence, conviction, dedication , generosity and respect”. ”

Pujols certainly embodies all of those characteristics.

He is president of the Pujols Family Foundation, which has had a dual cause since its inception in 2005: helping the poor in his native Dominican Republic and helping those living with Down syndrome in the United States. The slugger’s daughter, Isabella, has Down syndrome, a genetic disorder.

“As great as my career has been, my passion is what I do after the season is over and that is serve and give back. That’s how I want to be remembered,” Pujols said.

Pujols called Ali an “incredible man” whose legacy “will never be forgotten.” He said it was an honor to win an award in his name.

The award was previously called the Sports Humanitarian of the Year Award, but was renamed in 2017, a year after Ali’s death, to honor the legacy of the great boxer’s impact on society.