The Puerto Rican singer hanged out at the Downtown Center cinema, where he spent several hours with his work team and was also spotted at a hotel near the Santo Domingo boardwalk.

His presence coincides with the filming in Dominican locations of the movie “Flow Calle”, produced by Caribbean Cinemas, which includes the Colombian singer Farina and Puerto Ricans Zion, Myke Towers, Shalim Ortiz, the Dominican actress Clarisa Molina and the Colombian actor Lincoln Palomeque. 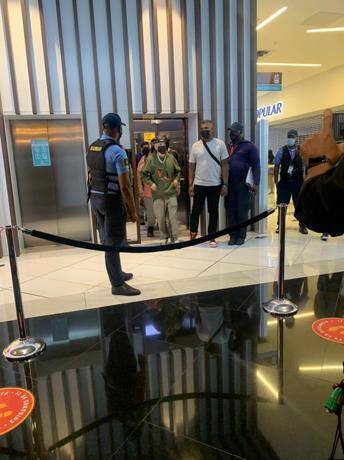 Caribbean Cinemas nor accepted or denied the reason for the singer’s visit to the Downtown Center cinema, where he was seen entering, and held information if it’s related to the film.

The Puerto Rican artist Yandel is showcasing his latest song “Meditar” (meditate), a love song that collects the most romantic and slow of the urban subgenres, combining them with effects that recall the sounds of meditation bells.

“I felt the need to make music that represented the moment that I am now in my life and that put people in a state where they could enjoy love for life, that they could dedicate to their partner, to his family”, Yandel said in an interview with Efe from his studies in Orlando (Florida).

“Meditar” is the first single from his next album, which “will continue to offer unexpected things,” promised the artist.

Yandel has gone through the pandemic with his wife and children and, although it sometimes makes him “sad” to tell about his experience because it has been “too positive” and he knows “that there are many people who have gone through it and are having a very bad time,” he acknowledges that the year of the COVID-19 has gotten the best of him.

During the confinement months of 2020, both he and his partner Juan Morera, with whom he makes up the Wisin y Yandel duo, decided to freeze the album that they already had ready to go on the market.

“The project was for it to come out as part of a tour and it is something that could not be done and still cannot be done”, explained Llandel Veguilla Malavé, his real name.

He accompanied the song with a video filmed in the mountains of the state of North Carolina, where he spent his winter vacations.

“Everything there was so peaceful, so beautiful, that I felt it was the perfect place to do the visual part of‘ Meditate”, said the 44-year-old artist.

The images, which show a solo Yandel surrounded by snow in some cases, are a contrast to the high physical and visual temperatures that usually accompany the videos of reggaeton, the genre that made him a legend, as he identifies himself.