Puntacana Forest Honey obtained for the fourth time the first place in the category of “Clear Honey”, during the 20th edition of the National Honey Contest, carried out by the Dominican Environmental Consortium.

The native honey produced by the Fundación Grupo Puntacana, has also won the award in 2014, 2015, and 2016, stands out for being 100 percent natural and without additives, preserving its original flavor and healing properties.

The product is the result of “poly-floral” honey that comes from various wildflowers, which is why the taste, aroma, and color of honey vary per year, depending on the flowers of the season that predominate.

Fundación Grupo Puntacana’s beekeeping program currently has 480 hives and produces about 2,500 gallons of honey each year.

In addition, with the increase in honey production, the beekeeping project has diversified the production of new products, extrapolating itself to beeswax candles, flavored honey, pollen, and royal jelly. 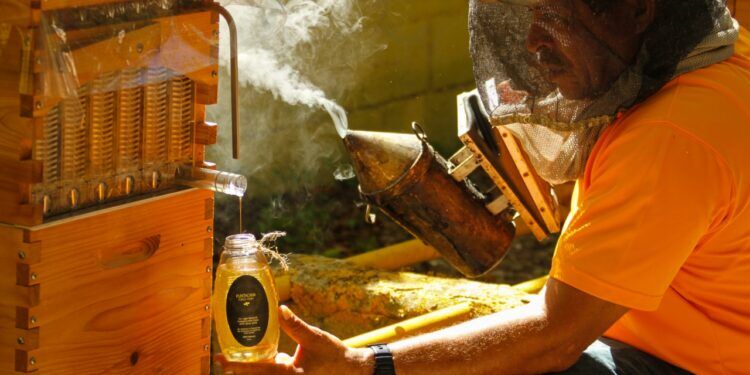 The proceeds from Puntacana Forest Honey support the programs of the Fundación Grupo Puntacana and its mission to protect and restore the natural resources of Punta Cana, as well as contribute to sustainable development of the Dominican Republic.

Puntacana Forest Honey is marketed in various points of sale in Santo Domingo, nine establishments in Punta Cana and Bávaro, and shopping centers in La Romana.

Origins of the honey

More than 50 years ago, Frank Rainieri and Ted Kheel, founding partners of Grupo Puntacana, motivated their beekeepers to undertake and generate additional income for their families through the production and sale of honey, a tradition that continues today in the Apiary of the Fundación Grupo Puntacana, located at the Puntacana Resort & Club.

Since December 2007, the Fundación Grupo Puntacana has maintained an alliance with the local beekeeper Pedro Julio Castillo, to produce the renowned Puntacana Forest Honey, a project that began with four colonies of bees rescued from the residential communities on the property and local forests located in the area; two years later, it had more than 100 colonies.

Ministry of Tourism reconstructs the access road to Macao Beach