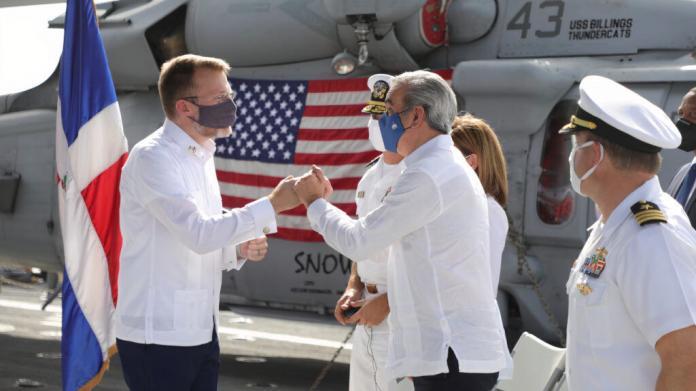 President Luis Abinader highlighted that the Dominican Republic and the United States maintain an excellent relationship, framed in mutual cooperation, and strengthened by the actions they undertake to develop both peoples and the growth of their economies.

Likewise, the Head of State stressed that both nations are working in a firm commitment to strengthening democratic systems in the region.

Abinader expressed his remarks in a speech on the United States Navy Ship USS Billings, as part of the celebration of the 245th anniversary of the Independence of that nation, where he reaffirmed that the good harmony between both administrations finds in the concept of security a common element to which they lend the greatest attention.

He affirmed that the fight against drug trafficking and regional maritime security are very important aspects on which they understand that collaboration at the highest level is necessary.

“For this reason, I want to salute the efforts made in Caribbean waters by the USS Billings of the United States Navy, captained by Rear Admiral Donald D. Gabrielson, Commander of the US Fourth Naval Fleet”, he said in a press release distributed by the Presidency.

He said that this ship arrived in the country with the objective of facilitating missions against drug trafficking threats, both in deep waters and on the coast, thus displaying its great response capacity and high technology in the persecution of organized crime, said a statement from press.

The president thanked Robert Thomas, Chargé d’Affaires of the United States Embassy, ​​who said he has always shown his good disposition, on behalf of his government, for maintaining excellent bilateral relations.

He also appreciated the support of the United States in processes of reforms as important and necessary in the Dominican Republic as that of the National Police.

“And it is precisely in this alliance that we find the will of the Government of the United States of America to support us in this fight against organized crime and mafias; whose actions affect all the countries of the world”, stressed Abinader.

President Abinader estimated that the growth, development and democratic consolidation of the peoples respond to the greatness with which their men and women defend their ideas, fight to achieve their aspirations and exercise power with justice and equality.

“As president of the Dominican Republic, a nation that was forged thanks to the courage and determination of men and women who understood the noble concept of Freedom as the highest degree to achieve the happiness, development and prosperity of their people, I am honored to share with you today the celebrations for the 245th anniversary of the Independence of the United States of America”, he stated.

He said to be extremely proud that both nations, to which they have close ties of friendship, advocate the same values ​​of justice, equality and sovereignty that inspired the independence process of the American people.

“All this, he added, in a process of independence that had an immediate reflection on the rest of the peoples of America and the world”.

“Today we celebrate, he said, the freedom that was ignited throughout the continent in 1776; the one that took root and gave rise to the rights of men and women all over the world”.

The Dominican ruler considered that July 4th, 1776, is a date that was marked as one of the most relevant moments in universal history, in which the letter with which the peoples of North America laid the foundations of democracy in this hemisphere.

He quoted, from that letter, what he understands is one of his best-known phrases, a universal and incontestable truth: “All men are created equal; endowed by their Creator with inalienable rights, among which are life, liberty and the pursuit of happiness”.

Abinader said that with this libertarian event they celebrate that search for happiness referred to in the founding charter of the United Sta and as harmony, hope, and the future.

“Happy 4th of July to all the American people for being an example of constant struggle, work, and effort”, he concluded.