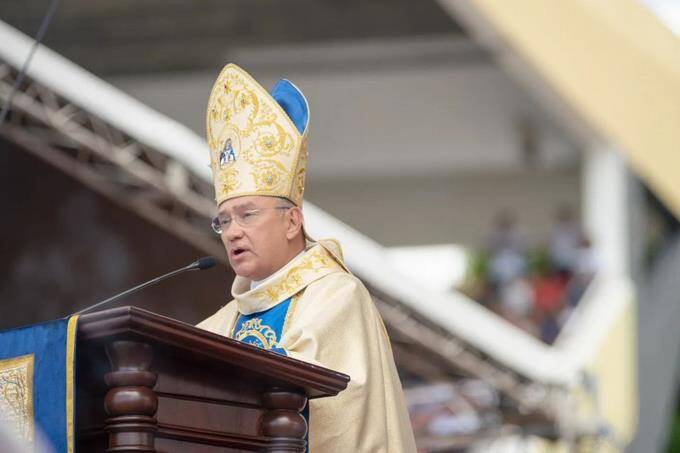 The special envoy by Pope Francis to preside over the closing mass of the centenary of the canonical coronation of the Virgin of Altagracia, Monsignor Edgar Peña Parra, highlighted this Monday that the painting of the patron saint of the Dominican people is a defense of the family and that, in the same way, in the Dominican Constitution, life is the first civil right mentioned.

He recalled that article 37 reads: “The right to life is inviolable from conception to death.”

“The painting of Altagracia, venerated by all Dominicans, teaches us to give priority to the value of life and family, asking for its miraculous interception, numerous Dominicans have come to this world overcoming many impediments, its image is a defense and an allegation in favor of life and the dignity of people,” said Peña.

The one sent by Pope Francis said that this painting is also a defense of the value of the family as an institution and of family ties that have been and are “harshly” denigrated and marginalized, but that, at the same time, continue to be the point of firmer reference for stability of the entire human and social community.

In that order, he urged the Dominican people to support and defend the family from everything that puts it in danger and to commit to safeguarding their precise and delicate ties as children, parents and grandparents.

In this context, he considered that young people, who are the future of the country, of humanity, should be thought of in a very special way, “my dear young Dominicans present here, I ask Our Lady of Altagracia to bless you, to give you strength in faith and that leads you to Jesus Christ because only in Him will you find the answers to all your concerns and all your desires.”

During his speech, Peña sent an affectionate hug and the Pope’s blessing to those who gathered at the Félix Sánchez Olympic Stadium, where mass was held, to all the Dominican bishops and, in a special way, to the pastor of the Archdiocese of Santo Domingo. , Monsignor Francisco Ozoria Acosta and his auxiliary bishops.