Authorities place the National District and 19 provinces on weather alert 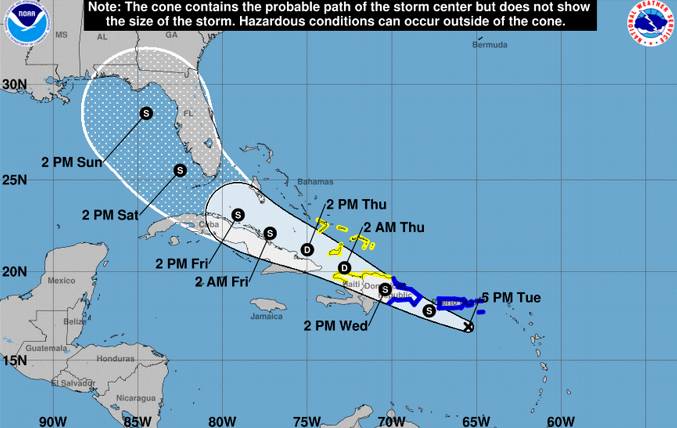 The Emergency Operations Center (COE) increased to 20 the provinces on alert for possible flooding of rivers, streams, and glens, as well as sudden or urban floods because the potential tropical cyclone number 6 was located about 540 kilometers to the east/southeast of Saona Island and about 340 kilometers southeast of Ponce, Puerto Rico.

The COE called on the civil protection organizations to start evacuations in the provinces on yellow alert, due to the effects of the phenomenon, which is expected to cause heavy rains when it passes near or over the country.

According to the forecast future trajectory, the potential tropical cyclone number six would be very close to the Dominican territory between the early hours and the morning of this Wednesday, reported the National Meteorology Office (Onamet).

The entity stated that this system is likely to affect the Dominican Republic as a tropical storm, if so, there will be large cloud fields that generate moderate to strong downpours, electrical storms, and frequent wind gusts, which would begin in the eastern portion of the territory. Dominican.

As it moves west/northwest, these downpours will be more intense and with possible tropical cyclone conditions towards other towns belonging to the northeast, southeast, north, southwest, Central Mountain range, and the border area during the afternoon and night, as per the latest weather report.