Abinader responded to a tweet from The New York Times newspaper stating that millions of doses of the vaccine are inactive in US manufacturing facilities, awaiting the results of its clinical trial in that country, while countries that have already authorized are begging for have access.

Luis Abinader said that waiting for the results “would not be fair,” in addition, the head of state added that the Dominican Republic “urgently needs” the doses of the vaccine to continue with the vaccination plan that began in mid-February. 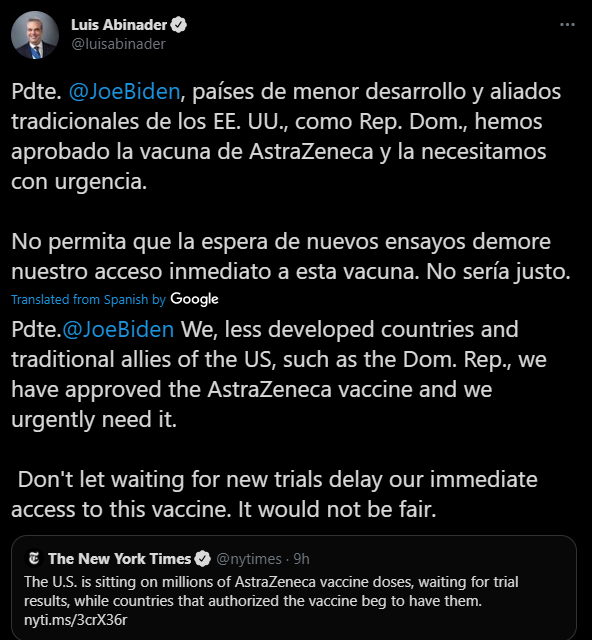 The US media points out that there are tens of millions of doses of the vaccine that has been authorized in more than 70 countries to face the pandemic caused by the SARS-CoV-2 coronavirus, which causes the COVID-19 disease.

Also that the clinical trial in the United States has not yet reported results and the company has not requested authorization for emergency use from the Food and Drug Administration (FDA), but it did ask the Biden administration to provide doses to the European Union, where it has not fulfilled its commitments.

The Dominican Republic signed a contract with AstraZeneca in October last year to purchase 10 million of its doses, at a cost of four dollars each. It was the first sales contract made by the Dominican State.

In addition, the country expects to receive 463,200 doses of that vaccine, in the first delivery of two million through the Covax mechanism, created to guarantee equitable immunization in the world.