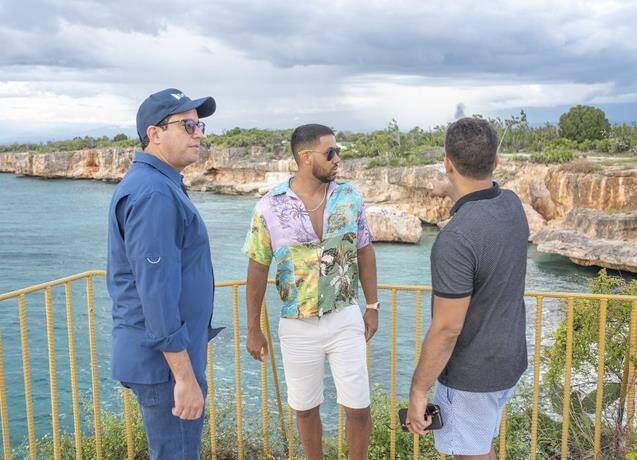 Dominican artist Anthony Romeo Santos made a visit to the beaches of Cabo Rojo and Bahía de las Águilas to see, first-hand, the Pedernales Tourism Development Project, which is structured under the modality of a public-private partnership.

“The King of Bachata” was received in the area by the executive director of the General Directorate of Public Private Partnerships (DGAPP), Sigmund Freund, who took a tour with the artist through the beaches of Cabo Rojo and Bahía de las Águilas and showed him the land where the first hotels will be built, explaining in detail the aspects contemplated in the Master Plan of the project.

The artist, who was accompanied by the show producer Saymon Díaz, after learning about the magnitude of the project, the economic and social impact it will have on that southern region, showed interest in getting involved in it and promoting the attractions that this new destination will have, which will be a luxury ecotourism proposal in the region, the first tourist destination to be developed from scratch under a public-private partnership.

During the tour, the executive director of DGAPP, Sigmund Freund, also showed Romeo Santos the facilities of the Senior Staff, the former Alcoa Corporation hotel, which will be suitable to function as a boutique hotel and where the project offices will be established.

At the end of June of this year, President Luis Abinader initiatd the project’s start-up works and revealed that nine international brand hotel chains had submitted letters of interest to operate hotels in Cabo Rojo and that in the first stage around 6,000 rooms would be built.

The Pedernales-Cabo Rojo Tourism Development project has contemplated the construction of 12,000 rooms in the next 10 years with an investment of 3 billion dollars.

The first stage includes the construction of between 3,000 and 4,500 rooms, an international airport, aqueduct, renewable electricity and other basic works.

With a public investment of about 550 million dollars, the construction works of the internal roads of the project with 24 linear kilometers of highways are progressing.