President Luis Abinader assured this Sunday that he will relaunch the province of Samaná as a tourism center with modern infrastructures and new jobs.

“Let there be no doubt that when we support the tourism sector, we do so with the Dominicans who make a living from this activity”, he said through his Twitter social network account. Similarly, he thanked the province “for its hospitality”.

The president made these statements after visiting Samaná, where he held meetings with representatives of the tourism sector and inaugurated the rehabilitation of the El Limón Playa Morón – Punta Lanza del Norte accesses, with an investment of 121 million pesos, with a length of 6.2 kilometers. 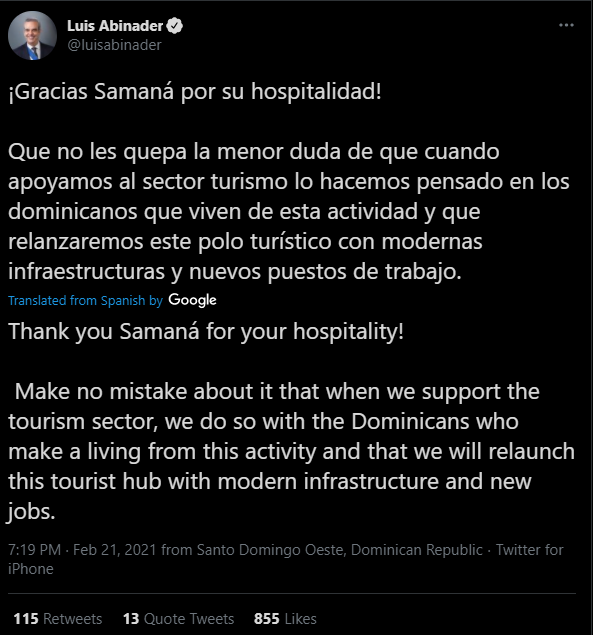 The work was completed in less than six months and is located in Limón in the Las Terrenas municipality in the tourist province of Samaná. It was built by the Ministry of Tourism, through the Tourist Zones Infrastructure Executive Committee (CEIZTUR).

The reconstruction of this road was announced on September 20th, 2020, and started on October 6 of that same year, to meet the request of tourist entrepreneurs in the area and the community of Limón, during the inauguration of a Treatment Plant of Wastewater in Las Terrenas.

The construction of the highway involved the development of related works, which were completed in a record time of five months.

“Today we are here to keep our word and announce the project for the reconstruction of the road access from El Limón to Morón beach, and Punta Lanza del Norte with an investment of 150 million pesos,” said the president.

He added that said the project consists of the reconstruction of the pavement from the exit of the town of Limón to the vicinity of Morón beach that is within the limits of a protected area.

The work will have a great impact on the tourist development of Limón, since it will allow the full use of Morón Beach, considered one of the most beautiful and with immense tourist potential in the area, whose main limitation was its difficult access.

Likewise, it will provide job and business opportunities to the residents of the community and will contribute to the improvement of the quality of these people.